I want to try a new approach to posting about the design insights I’m learning about and incorporating into the things I’m working on.

My friend, who I know as Oasna from my World of Warcraft guild, took me up on my illustration project to turn my friends’ Warcraft characters into undead Champions of the Scourge.  His entry is the third and represents the Warrior class.

He thought I’d be turning the character into a more traditional Death Knight– styled as either Frost, Blood, or Unholy.  That wasn’t really the direction I was going for.

I started the design process with a written description.  It helps to flesh out the character in my head. I knew I wanted to focus on body horror and a sense of torment for this particular character.

Then I created a style reference.  It’s a collage of images that help me hone in on the look, feel, and style of the piece I want to create.  I try to figure out what I want the pic to feel like this way.

I wasn’t just look for body horror, but larger-scale creatures within the theme. I looked for images that evoked a sense of torment in the subject. Because the character is an orc, I naturally gravitated toward the Plague Eruptor monster, which is an undead monster in the Warcraft universe made from orc corpses. It’s a Warcraft character at the end of the day. so ought to remain grounded in that aesthetic.

Thumbnails are next.  This is to bang out a silhouette. I start with lighter-colored blobs on a darker background and then start using the background color to ‘carve out’ the shapes and lines. Detail is loose. I’m looking for stature, pose, weight, etc.

I departed from the thumbnails to start focusing on close-up details.  This bust came out of a concept for turning a Warcraft orc into a kind of flesh monster. His lower mandible is fused into the top of his rib cage.  Can’t help but think of Marvel’s Venom with that tongue. 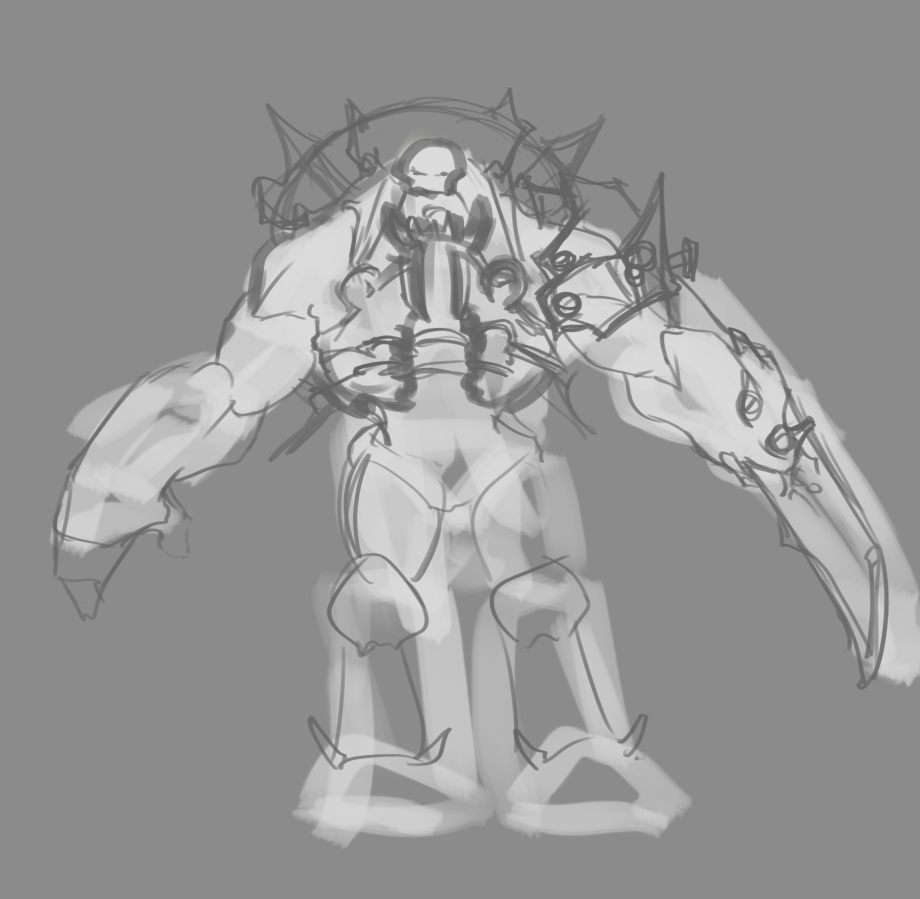 T-pose to get an idea of the character’s basic anatomy.  This is where I decided I wanted to split his rib cage wide open, emphasize the bottom margins of the ribs, and shove a jagged blade into the stub of his arm. You can probably see whats shape in the thumbnails I drew from for this.

The rough sketch for the character. Armor mostly fleshed out. This helps me figure out where I need to lay in detail.  I had to be conscious about the arm blade. I want it prominent but not obscuring too much.

The lineart is much clearner now, and these will serve as the final lineart. The armor’s details are more realized, and between this sketch and the last I completely changed the design of his pauldron and removed some of the clutter around his silhouette. The arm was changed so that the blade was more in line with the rest of his arm. 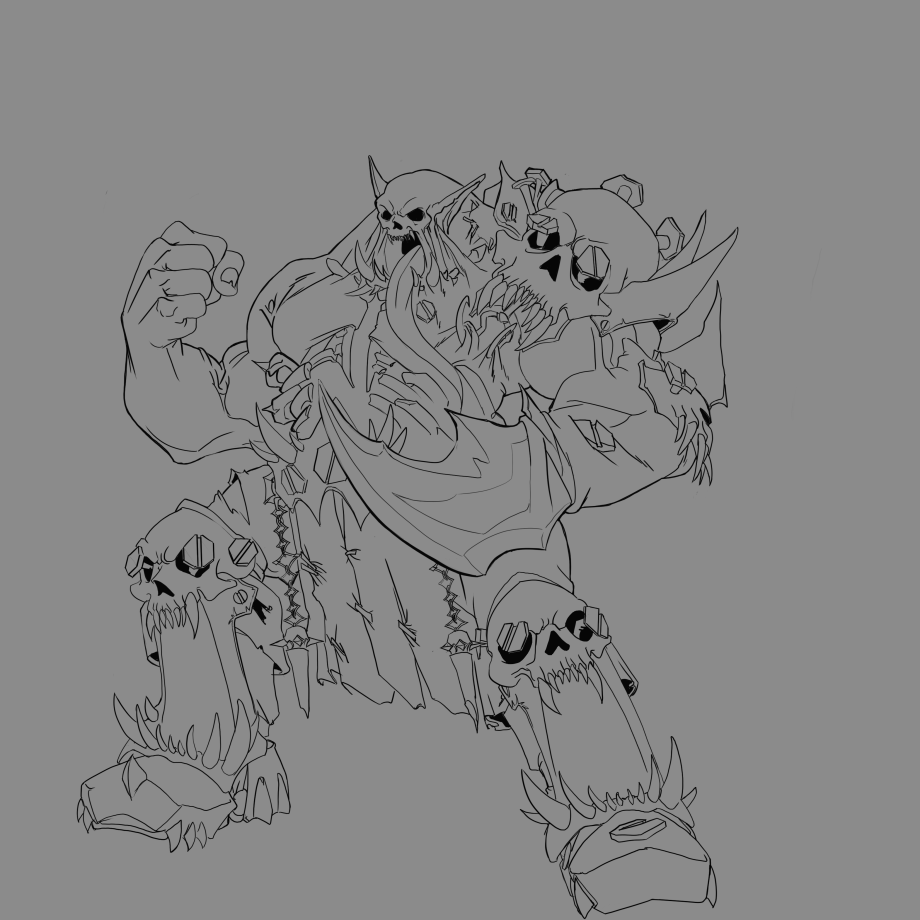 Inks! I wanted something that would leave a stark, dark line. That meant turning off transfer settings. Width was still determined by pen pressure, but opacity remained at about 100% to try and simulate traditional ink pens. 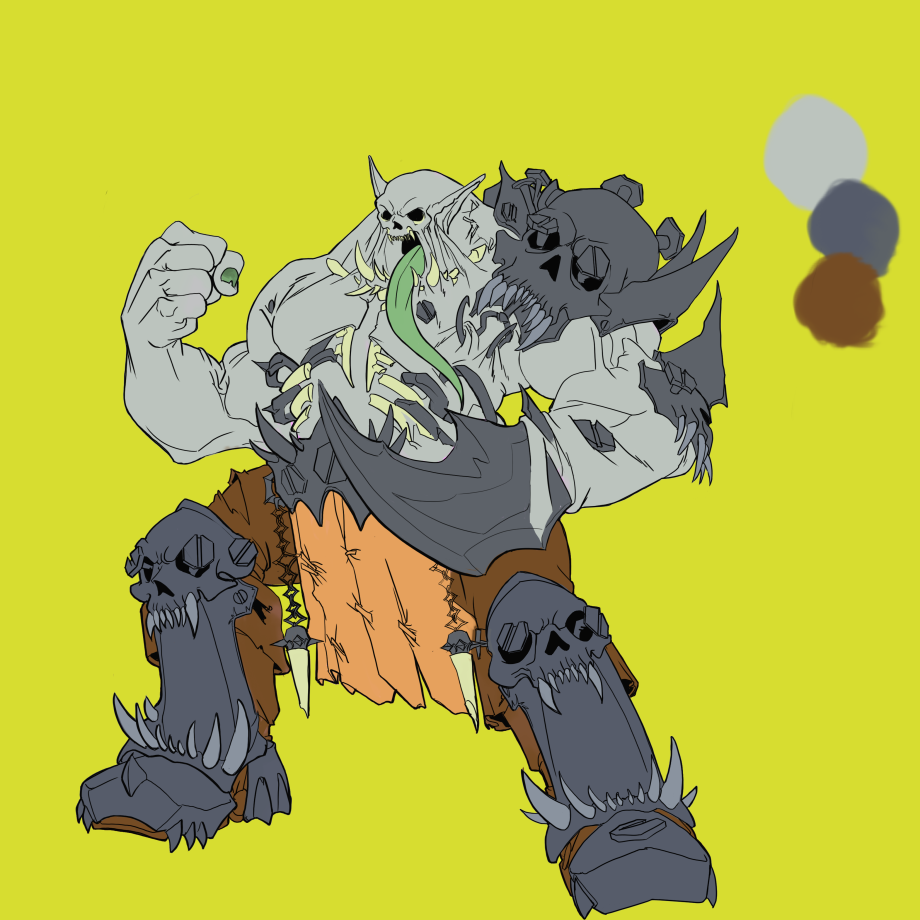 Base colors boi! When all the base colors are locked in we get to play.  Like before, I made a mask out of the character’s silhouette and cut away any negative space and filled it with a solid and obvious color (pink for reasons). Each base color got its own later and was alt-clicked onto the fill to make sure it stayed within the silhouette of the character.

And now, the final piece. Extra layers were made for blood, the runes on the blade, the glow in the eyes the drool, the skin was made more pale and pallid, like a rotting corpse.  I cheated and didn’t look up references, though I’m sure this piece would benefit from it.

My layers are really messy. Some of the blood effect is directly only the metal or the skin layers, which is really bad practice I need to curtail. The pedestal of bones he’s standing on was necessary because of the stance.  I created a more interesting background to make him pop. It’s super basic, but it’s better than a plain and features plane.